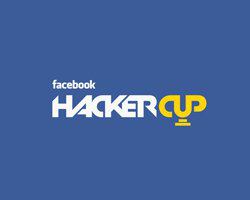 Hacking is core to how we build at Facebook. Whether we’re building a prototype for a major product like Timeline at a Hackathon, creating a smarter search algorithm, or tearing down walls at our new headquarters, we’re always hacking to find better ways to solve problems.

Today we’re announcing open registration for Facebook’s second annual Hacker Cup. Programmers from around the world will be judged on accuracy and speed as they race to solve algorithmic problems to advance through up to five rounds of programming challenges. This is your chance to compete against the world’s best programmers for awesome prizes and the title of World Champion.

What: An annual algorithmic programming contest open to engineers from around the world.

Where: Three online rounds with the finals at Facebook’s headquarters in California.

When: Registration opens January 4, 2012 with the three online rounds occurring throughout January 2012. World finals to follow.

Finals: We’ll pay to fly and accommodate the top 25 hackers from the third online round out to our campus.

Online Round 1 will last 24 hours from January 28, 2012 at 10:00 AM PT and ends on January 29, 2012 at 10:00 AM PT. To advance to Online Round 2, participants must solve at least one problem correctly. If more than 500 people solve at least one problem correctly, then the top 500 participants will advance, as well as everyone else who answered the same number of questions correctly as the 500th-place contestant.

Facebook will fly the top-scoring 25 competitors to Menlo Park, California, for the final round of competition on March 17, 2012, where they’ll receive some great cash prizes and other awesome goodies. Out of these 25 finalists, one champion will emerge and be immortalized on the Hacker Cup trophy. Finalists will be responsible for obtaining their own entry visa before arrival in the USA; however, Facebook will reimburse the finalist for any visa application fee and up to $100 USD in travel expenses incurred in obtaining the visa. Facebook will not reimburse any fees or expenses related to obtaining a passport.

David Alves, a mobile engineer at Facebook, is a fan of Bloom filters.